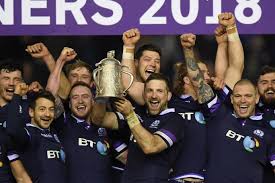 The humanoids were in a state of excitement on Saturday – yesterday.

They were chattering madly and virtually ignored me as they prepared to go out and about in Edinburgh to see Scotland play England at rugby. The Calcutta Cup they called it? Fuss about nothing if you ask me.
Embarrassingly Trumpton was clad in tartan trousers. Has he no self respect that man?  She had on a thistle and they put my tartan neckerchief on – though I quite like that to be honest. Anyway, before they went out he tried to get me to out for a walk with him.

He was trying to rush me and I just knew I was going to be left in the house on my own when they went off gallivanting. So I did what any self respecting sausage would in that situation. I pretending I was smelling snow drops whilst scoping out a magnificent mound of fox poo and got right in there. My shoulder was down and I was in before he could stop me,

“Charlie noooooooooo!” he shouted as he ran across the park to distract me from the job in hand. But it was too late, I was a good 900  in and at it- I learnt that in the winter olympics watching those skiers – wow – it was effective. I was honking.

The tartan trousered one then tried to get me on my lead, I knew he wasn’t going to pick me up cos when I say I was high –  I was a high as a kite.  I clenched the toenails into the pavement – to make sure people thought he was being cruel and gave him the evil eye –  but he is stronger so I was dragged home on the lead.

When the door opened she screamed – “aaaarrrgh what the hell is that smell? ” and then she saw me.

She ran the bath and he held on tight. I tried to run but he had secured me in and old towel so I couldn’t roll round the house like a stink bomb.   I was lofted up and dipped. The humiliation! He even used some L’oreal shampoo on me.

Now I smell like a girls head and my hair is all fluffed up like a game show hosts bouffant blow dry.  She took a photo of me all clean and smelling appallingly floral – she didn’t notice I stuck my tongue out at her.  Can you see it? Ho ho ho.

Frankly I am glad was left behind. I could not abide be seen out in public like that.

Oh and Scotland won – and the noise they were making when they came in last night – its not going to be pretty when they finally get up.

This is a text widget. The Text Widget allows you to add text or HTML to your sidebar. You can use a text widget to display text, links, images, HTML, or a combination of these. Edit them in the Widget section of the Customizer.